Talking about the weather... in a different style Usually, people talk about the weather when they are bored or have no other interesting idea of a subject of discussion. However, this topic doesn't necessarily need to be dull, as we will show you below. If you and your member have finished all other ideas, you can also talk about the weather, but... in a different style. So, instead of telling him how the sun shines or how cold it is this morning, you can surprise him with some truly incredible facts. We have collected a few of them below, from trusty sources such as the National Geographic and sites specialized in collecting fun facts.

1. The coldest temperature ever recorded on Earth was -89.2 degrees Celsius. This makes a random chilly winter morning much more bearable.

2. A heatwave can make train tracks bend. By contrast, this fun fact would make a hot summer day more endurable.

3. About 2.000 thunderstorms rain down on Earth every minute. Ever felt lucky? If you didn't, after reading this fun fact you totally should!

4. In 2003, a heatwave turned grapes to raisins before they were picked from the vine. We would say this was a total waste of good wine :)

5. Raindrops can be the size of houseflies and fall at more than 30 km/h. They don't seem that harmless anymore, do they?

6. Cape Farewell in Greenland is the windiest place on Earth. Luckily, nobody actually lives there (no doubt!)

7. Hurricanes can push water ashore for more than 6 meters. Therefore, we could say hurricanes are bad for the beaches and your summer holiday :)

8. Wildfires can sometimes create fire tornadoes. If you have ever wondered how hell looks like.

9. Some tornadoes can be faster than formula one racing cars. You can use this fun fact if he says he is passionate about cars :)

10. Waterspouts, which are rotating columns of air over water, can make sea creatures fall from the sky. Suddenly, American blockbusters don't look so creative anymore.

11. In 1995, hailstones bigger than cricket balls fell in Texas, USA. However, talking about the US, I think they should have compared them with baseballs.

12. In 1684, it was so cold in London that the Thames river froze solid for 2 straight months. Imagine if this would happen today!

13. The average global temperature is up 0.94 degrees Celsius since 1880. This doesn't seem like a lot, but it goes to show that global warming is real.

14. 1 billion tons of rain falls on the Earth every minute. Upon hearing this, you might say draught isn't a real problem, but unfortunately it is, in some regions.

15. A molecule of water will stay in the Earth's atmosphere for an average duration of 10 to 12 days. Talking about water's circuit in nature.

The real fun fact about all these curiosities is that you shouldn't use them all at once, but rather insert them in the conversation whenever you feel it's the case. This will make dialogues more interesting and will entice members to spend more time in the conversation with you.
Autor: Studio20.live 27.01.2020 Webcam jobs offers: find out how to improve your life in 3 simple steps! Confessions of a cam girl with vitiligo: “Being different is actually a blessing” 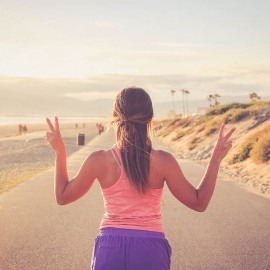 How do webcam models keep fit? Here are some insider tips & tricks!